That doesn't mean I don't love them to pieces, but I always take my men with a grain of salt.
I'm also usually packing something, because hey, you can't ever be too safe.

Now I sound like the crazy girl, and I get it. You don't know what's happened in my life to get me to this point. So, brief story time, incase you missed this before, or I didn't post it.

Halloween 2010, instead of going out with the homies and drinking in Dupont like this past year, I scheduled a second date with straight sex-on-a-stick Mr. Quirky.

It was a lovely date. He was a perfect gentleman, and I had a great time.

As I drove back to DC, lighter than a feather, on the wings of happiness, I turned up the radio and sang my little heart out to Bryan Adams, "All for Love," because this girl is a 90s child and loves those Disney created songs and hell if I don't like 3 Musketeers starring Oliver Platt and Charlie Sheen before he was crazy (mmmm - delish).

It was around Midnight:30 when I pulled up to my apartment building. I noticed some people loitering in the parking lot, but it didn't dawn on me that they weren't supposed to be there until I got out of my car and started walking towards the entrance.

They started walking towards me.

You know that lecherous stare that usually accompanies a man who has had one too many drinks or the ones that burly bartender at Front Page gives out on the weekends. Man he has some lecherous-ass-stares.

My immediate reaction was run inside, but I was in the back part of the lot and the door was too far, so I ran back to my car, their feet beating behind me the entire way.

I might not be a fast runner, but I did master the 400m in middle school (haha) so I can stride my fucking ass off.

I opened the door, slammed the keys into the ignition and made for a quick getaway, but I never noticed that one of the feet stopped chasing.

While one guy jumped in front of my car, the other had jumped into his and began circling around to mine. I didn't know what to do.

I panicked and hit the gas.

The guy on foot jumped out of the way, but the guy in the car circled in front of me down an aisle.

Slamming my car into reverse, I hit my friend's car trying to get away (this is slightly funny because we had gone to a halloween party the night before, and he pointed out he parked so far away because he didn't want people to hit his car - haha).

At this point in time the second guy had hopped into another car, while I flew down one aisle to exit the lot, with the other car hot on my trail, car two (without their lights on), swerved in front of me and came within inches of my front bumper. The other car was boxing me in. I was between sketchy car one and sketchy car two both inches away from both bumpers.

That's when the guy in the car to my front began to open his door.

Alone, panicked, and frightened to tears, I did the only thing I could think of and laid on my car horn for what seemed an eternity. The guy closed his door,  revved his engine, tapped my bumper and backed away. Car two was still inches from my back bumper but I drove as fast as my car could carry me down the back way of the parking lot until I was sure they were gone, which is when I called (in this order) - the guy whose car I hit, my parents, and the police.

After that one of my Uncles mailed me something to keep me safe, and it's rarely not on me. The only time I've been out without it. I had some guy grab my arm under the silver spring metro. He started to pull me into the shadows, and I screamed. I screamed with all I had - with all the breath in my lungs - with all the breath I could muster, while beating the guys' arm as hard as I could.

Needless to say.  I know that there are creepy creepers out there, so I am skeptical.

Plus the craigslist killer.

Plus I've dated my fair share of war vets, and they can wake up pretty fucking violently.

This all goes into saying, I take everything with a bit of skepticism. I'm skeptical of trusting whether the man I'm with wants to love me or lock me up in a basement and prod me with cigarettes.

Which brings me to the point of this post.

People should know who you're dating. I'm not saying you need to tell them everything about the person you're about to go out on a date with, but they need to know at least their name and number or address or where you're going.

Because what happens if one night that guy from Plenty of Fish turns out to be a psycho ax murderer and not the dreamy steam boat you thought he was. What if the girl from the coffee shop turns out to be the mistress of some bizarre sex slave trade. You don't know! It could happen! And there you'll be with either an ax sprouting out of your neck, or chained to a pole in a zebra speedo with 20 other similarly clad men.

When I first started dating guys outside of college (aka outside of my 'small-town'), I started sending bizarre texts like, "If I die, SexyFace did it," or "If I'm found facedown in a stream, check out Loverboy333 on OkCupid."

And I know what you're thinking, "God, LoRo, those are some morbid ass texts."

But they serve a purpose.

One they're bizarre enough that my friends remember them. They're slightly morbid so my friend will probably text back with where are you going, then I share that. So people know who I'm with and what I'm doing.

I don't want something to happen to me and have my friends and family not have leads into who tortured me with hot iron pokers and left me for dead in an alleyway.

Since I don't have a roommate anymore, I could probably be gone for a few days before anyone noticed - to be honest.

No one calls me on a regular basis aside from my Skype Husband, aka, MrStateDepartment, and to be real he only calls me when I'm on Skype. If I'm not on Skype he can't call me.  He will send me emails if he hasn't heard from me in a while, but I'm the only person that sees my email inbox though, so we're back at me dead and no one knowing.

So if you haven't been scared off by this post, I'm hoping you've taken away the point which is - when dating people you barely  know *cough* almost everyone *cough,* you need to take some sort of precautions so that people will know you're safe, post-date.

Even if it's a phone call to a friend afterwards giving a rundown, because if your friend expects that call, when they havent heard from you, they're spidey-senses will go tingling.

All in all, remember dating is tough, but rising from the dead is usually only reserved for zombie movies.

And since not all Ax Murderers have good intentions... 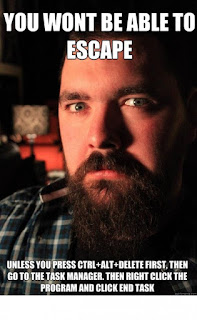 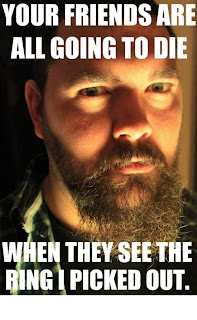 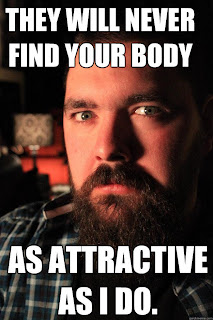