Single During a Crisis

My Toyota built car (a first generation Scion) began to accelerate uncontrollably Saturday night sending me from 35 mph to 65 mph in less than 15 seconds, and I wasn't even pushing the gas pedal.

Since I have no urge to look at my much beloved bright orange xB, named Terrence, and since you could not pay me to get behind the wheel again, I spent the majority of Sunday stuck in my bumblefuck apartment out in the suburbs reading about the rash of Toyota accidents that occurred in the mid/late 2000s.

The latest report I found says that driver error, sticky accelerator pedals, and an unwieldy floor mat are what has been causing Toyota manufactured vehicles to careen out of control. According to Toyota  there is "NOTHING" wrong with the vehicle itself, because they've fixed the problem! But ladies and gentlemen that's a big crock of bullshit.

My grandfather is one of my most favorite people in the world, and lucky for me, he also spent the tail end of his golden years before retirement working as a car mechanic and body repairman.

A few months after the first few Toyotas started to accelerate uncontrollably, my grandfather and I were sitting on his porch talking about it. He told me exactly what to do in that situation. Pull out the mat. Push on the brakes with both feet, as hard as you can, flip the car into neutral gear and when you get to a slow speed, put it in park. You can find details of what to do HERE. Seriously, everyone should read that, because it could save your life.

I don't necessarily think that the bit about turning off your engine while speeding down the highway without control of your brakes is logically sound, because you can lose the ability to operate your steering wheel (if you have power steering).

Now I don't know what caused my sudden and horrifying acceleration into the land of the almost bloodied and mangled with bits of metal impaling my flesh, it could be electronic problems, cruise control (which my car does NOT have), or the so-called, "tin whiskers," that new studies are suggesting, but I'm going to give you a play-by-play of the most horrifying two-minutes of my life.

Late Saturday night, after watching the new Reese Witherspoon/Chris Pine film with some of my sorority sisters, I packed into my car and began singing to the Adele album playing in my CD player. As I left Bethesda and headed towards NIH, I accelerated my car from the 25 mph to the 35 mph limit increase.

Everything happening exactly how it has occurred for the year since I've lived out here. Everything very standard. As I approached the hill northbound past Cedar Ln. I pressed on the accelerator to increase my momentum to get me up the hill.

I flashed back to the horrors of the runaway Toyotas and remembered... that Toyota blamed the floor mats! So I immediately ripped my floor mat out from under my feet and threw it in the passenger seat.

The car continued to accelerate up the hill. I tried the brakes again.

I then remembered... Toyota blamed sticky accelerator pedals. (Don't try this at home kids.) Being an expert at driving at slow speeds and picking my cell phone up from between my feet when it falls there during normal driving conditions, I reached down, and tried to pull the gas pedal up. I pulled AS. HARD. AS. I. COULD. I'm not a weak person, by any stretch of the imagination. You can ask this R.A. fellow I made out with my freshman year of college. I've got great upper body strength. I pulled him off the bed (he had to be 285lbs at the time). (It was actually really cute. He was trying to get me to join him on the bed by "fishing" with a lanyard, and I didn't realize what he was doing, so when he "hooked" me I pulled back. Who knew I was that strong).

Guess what... even though I pulled as hard as I could, the pedal stayed stuck.

At this point in time, according to the all knowing Toyota, it becomes driver error as to why the gas pedal wont budge... but (1) I wasn't even pushing the fucking pedal and (2) I DONT WANT TO DIE.

So I flash backed to me and my grandfather, sitting on the porch. Him smoking a cigar, and me sipping a sweet tea.

"If your car wont stop, push on the brakes like your life depends on it. When you get to a relatively slow speed, slip your car into neutral, and stay clear of other cars. Always remember to stay calm."

So, I did what any of my cousins and aunts and uncles should do. I took my grandfather's advice.

As I crested the top of the hill through the stop light at Alta Vista Rd, and looked down at all the cars stopped at the light, and the swift death that would take me. I slammed on my brakes with all the strength one can muster while sitting down in a death trap careening towards a stop light and the point where the red line metro slips under ground between Grosvenor and Medical Center, because my luck, I'd fly onto the tracks into the headlights of an oncoming metro train. 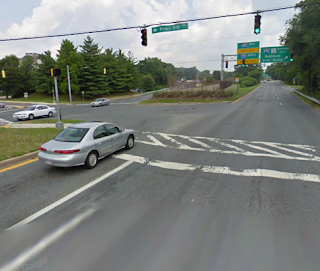 The brown fence blocks off the redline metro tracks.

When I got the car slowed down to about 40 mph from the 65 mph it had been at the top of the hill, I slipped the car into neutral, and continued pressing on the brakes, which were still fighting me every inch of the way.

By the time I was 20 ft away from the intersection and certain death, as cars came flying around the corner of Pooks Hill onto Rockville Pike, I had managed to get my car down to 10 mph. I had no time. I could either force it into park or go swiftly into oncoming traffic in the intersection. So I put it in park, switched on my hazards, and after a few short breaths managed to call my parentals to see who I should call.

The poor AAA people weren't lucky enough to get calm me though, because by then I had no more reserves, I started crying elephant tears as I sat in the median trying to get them to send me a tow-truck.

In the past, every time I saw another Toyota send it's passengers to an early grave, I thought, It couldn't happen to me. I drive a Scion, we're so much better. But it did. A 2004 car with less than 60,000 miles on it sent me on a steeple chase of death where victory and survival could only be found in the collected wisdom of my grandfather.

That's my story. I'm not a dumb person. I didn't panic and push the acceleration pedal while my car rapidly sped up. I managed to remove the floor mat which had supposedly caused death and sudden acceleration in other cases. I also thought to perhaps loosen the "sticky accelerator pedal," which didn't work either. Toyota has something wrong with their cars, and it's not just the Toyotas it's anything manufactured in a Toyota facility. Until they figure it out, driving a Toyota is akin to putting your life in the hands of a swift executioner. Their continued negligence in these situations is disgusting, and needs to be seriously investigated. Not this sham of an investigation, which only tells you what isn't wrong with them."

But that's not the only reason for this post, the second reason that I feel this post is important is because  being single during crises is hard. I almost died. I know you hear people say that all the time, but seriously people. Had I not been thinking straight, had my grandfather not been a mechanic, or had I not remembered all those old news stories about the Toyota death traps, I actually might have been on the morning news as another Toyota statistic.

After the incident, I texted my friend Sam, who is absolutely amazing and came to keep me company. She's absolutely the best. That's the most important thing you can have as a singleton living in Washington, DC - friends. Friends are your best defense against the emotional turmoil of crises and tragic circumstances.

If I didn't have my friends as a support group, I think I would have gone crazy and packed up my life here a long time ago.

The most important thing to do when you're post crisis is to get yourself somewhere safe.

After you're somewhere safe, and you've called 911 or AAA, and help is on the way, call a loved one - family or friend, and talk about it, keeping your panicked emotions inside of you isn't good for your emotional health. You need to talk to someone. Even if all you can manage is broken up words amidst sobs of relief and distress. Call them.

When everything is over, and you're back in your home or in a safe location, indulge.

You've just been in a horribly trying situation. You deserve comfort. If a friend volunteers to come over, let them. Let them be there for you. You can't be strong all the time. Vulnerability is human. You can't always put forth a brave face, and if there's anything that can help you through an emotionally difficult time, it's a friend. Indulge in their friendship. Indulge in a plate of cookies. Indulge in a bubble bath and a fluffy warm towel, and a bottle of strong wine. Don't drink to the point of being blind, but if you need a drink to calm your nerves. For all that is good and holy in the world, drink.

Just always remember during crises, you're not alone.

You have friends and family who love you and who can take care of you, when you're too flustered to take care of yourself. You don't need to pity yourself and dredge up thoughts about how you need a significant other to wrap you in their arms and hold you until the panic goes away. It's nice if you have that, but as a singleton, most of us don't.

Friends and family are the most important weapons a singleton can have in their arsenal during a crisis. That and the ability to take some deep breaths and calm yourself down.
Just remember that.