Watch Out The Samoan's Throwing a Punch!

This is how far away it is from DC... keep in mind I'm on the OPPOSITE side of the city.

The NAVCC is a part of the National Film Registry, which is in charge of saving all films (music videos, short films, cartoons, docs, etc...) which have a significant cultural value.

The films are stored in giant walk-in-freezers of sorts in a building built by the government in order to withstand a nuclear holocaust. Originally it was built to store all the money needed incase of a nuclear winter for everyone east of the Mississippi, but in the early 2000s it underwent a huge redo, including a recreated art-deco theatre, which shows movies every Thurs-Saturday. It's definitely worth checking out if you're a movie buff. Check it out!

This is the "Packard Campus," as they call it. It's the building with the theatre and the storage units. It's also great architecture from the cold war period.

I went there in order to finally meet this man, TheDancingLumberjack, with whom I've been talking with since... early June through email. He's a highly intelligent driven 30-something-year-old man, who owns a hobby farm. He was all-in-all very pleasant to meet in person, but I felt as though... there was (1)No Chemistry and (2)It was kind of low to make me drive all the way out to Culpeper, when I have a 10-6 job, and he doesn't (because seriously... rush hour is a bust) and (3) He looked... NOTHING like his pictures. Seriously I think I was on a date with a completely different man and (4) 6'4" really? You're more like 5'11."

I can never re-iterate this enough. Do NOT lie about your height. Just Don't. It's not cool.

I'd rank the date a 5 out of 10. The man was pleasant enough - he brought me Pad Thai because I had been on the road since 6 and he knew I'd be hungry, and he remembered I liked Thai food. He was congenial. We didn't struggle for conversation, but something was missing. I don't know what. It might have been my enthusiasm, since I met him at 8, but it does not bode well for his future in my life. I might give in to a 2nd chance, if he's willing to come up to DC, but that's the only way it's happening.

The weekend got off on a rocky start, due to poor planning by my bosses and their refusal to pay someone to drive to Baltimore, who has actually been to Baltimore. After driving for an hour in rush hour "RH" traffic there. I got stuck in RH traffic in Bmore and then RH traffic out of Bmore only to discover something I had in my car needed to go with the delivery.

Bob, "You look really familiar."
blah blah blah
Zoya's housemate, "Yeah, did you talk to Bartender about the game tomorrow?"
Bob, "Yeah, Bartender said..."
Me, "Wait do you mean Bartender Bartender?"
Bob, "Yeah do you know him?"
"Yeah he's a good friend of mine."
"How good of a friend?"
"A friend."
"You, KNOW him KNOW him, don't you."
Me turning bright red.
"GIRL YOU DO! OMG OMG I KNOW HOW I KNOW YOU. You were that NINJA girl who appeared out of nowhere in the foyer!"
Zoya's housemate, "What?"
"She literally... OMG... Bartender and I walk into the house drunk off our asses I close the door, and I walk into the house waiting to use the bathroom and out of NO WHERE, she appears at the foot of the stairs, like a fucking Ninja. I didn't hear her or nothing."

This conversation went on for 30 minutes about how I have ninja stealth. This then digressed into Zoya's housemate and his lady friend leaving us with Bob...

Who then propositioned me for an after party in his bed.

Later that night Bartender and I were in a fight over something (probably the fact that he encouraged me to take up his housemate on the after party offer) so I was doing my best to piss him off further by flirting with his other friends at the bar, including a large Samoan fellow, whom I'm going to call Tanto (and yes I realize that this name is not politically correct, but if you've seen this guy... you'd call him Tanto too... I'm serious). Now Tanto is a large, large man. He makes Billy Mays look like a Victoria Secret Angel.
.
.
.
.
.
.
.
.
. He looked similar to this... Seriously... he makes Dwayne "the Rock" Johnson look like a tiny, tiny dancer.

And I just managed a few winks, and a nudge, and a little wave before it was time to go to the next bar, because where we were was not doing it for us. So off we went to the Mardi Gras Bar, and the night took wing.

An hour in and I see Tanto. He moved bars with us, and he. was. drunk. I'm talking 5 sheets to the wind, hornier than a rhino, drunk.

He found me again, and he put his junk on my ass, and I couldn't deal. I actually refuse to go to clubs because I cannot stand when guys pop out of nowhere with their own brand of Ninja stealth and toss their junk on my butt... seriously, back off.

The next hour at the bar turned into a dance of me trying to play keep away from Tanto, but failing epically.

I told one of the bartenders, who knows Tanto, and he got Tanto to stand down for a little while, but Tanto, couldn't pull himself away. Sam and I draped ourselves on one of the bar's employees, our good friend Pete. Even though Pete is probably about 5'10, 170lbs, just having him with us deterred Tanto enough that I didn't see him for the rest of the time I was in the bar...

But Pete saw him again... Pete saw him sooner than he wanted to, because as Pete and a few of the bouncers tried telling Tanto it was time to go... Tanto threw a punch that landed Pete in a heap of trouble and cleared the bar faster than you could say, "Fire!"

Shaken and Stirred, I rushed to close my tab, and we piled into a Taxi, keeping in mind to keep away from Tanto who was still out in the streets. As we piled in... we looked back at the bar to witness Tanto slamming his fist repeatedly into ANOTHER man's face, with whom Sam had been talking to earlier...

After the oh-so-exciting night, which shook our shoes off, the following day, I had a really solid date, with GalaxyQuestGuy, which involved hide-n-go-seek, the natural history museum, seeing what I looked like as a homo-florensis human, seeing what he looked like as a neanderthal, the national museum of art, and it was actually the cherry on top to what could have been a complete wash of a weekend. 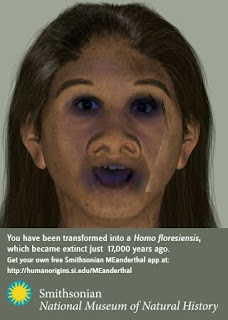 ONE DAMN SEXY BEAST, THAT'S WHAT!

If you want to see what you look like as a Neanderthal or a Homo-Florensis, check out the Iphone or Droid App called Meanderthal... those Smithsonian Peeps are so clever!

And no it's not lost on me that Homo-florensis me looks very similar to Tanto... the irony abounds.
Posted by LoRo at 10:33 AM