Body Type... It's Not an Aspirational Category

Welcome esteemed reader to Single in the District's blog post about how it's not O.k. to lie about your body type: Male Version.

We all know by now that I am familiar with online dating. Big woo!

But what you do not know is that my biggest pet peeve is someone not knowing what their body shape is, because I do not want to search for "full bodied" and see a pip-squeak. I don't like it. It messes up my hours spent perusing the men folk, as I'm sure it has yours.

So in honor of my newly acquired passion for draw something, I thought I'd draw something that we're going to call a "guideline" for your body shape and exactly what you should be checking on your profile.

Let's start with your run of the mill AVERAGE MAN.

This is what women think of when they think Average Man. They think, "plain - run of the mill." I see this picture and think meh, it's like how I imagine Bill Murray is shaped like.

Next we have in a great juxtaposition is OVERWEIGHT and SKINNY. 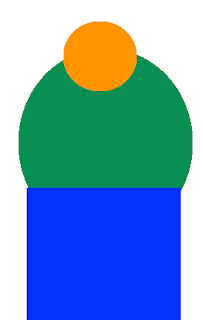 Skinny is NOT thin. Skinny is what I think of when I think of a male version of Kate Moss. I don't know of any male version, but if you look up Kate Moss you'll get the drift. Overweight is Jim Belushi meets Norm from Cheers (I always bring it back).

Next up the male version of CURVY vs. THIN. 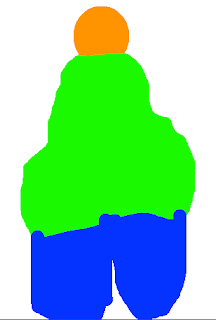 While Curvy may look similar to Overweight, to the trained eye they are very different. One looks like a pear the other looks like a watermelon. We got it? Thin is NOT skinny. To the untrained eye you would take a look at this lovely brown gentleman and think, "meh he's skinny," if you're comparing him to the curvalicious man on the left, BUT in comparison to Mr. Holocaust/Anorexia up above, this guy has a little meat on his bones. I'm going to be real with you, I think skinny is not something to aspire to - thin might be - if you're into that...

Now for my favorite level of distinction, readers. What's the difference between JACKED, ATHLETIC, and FIT. 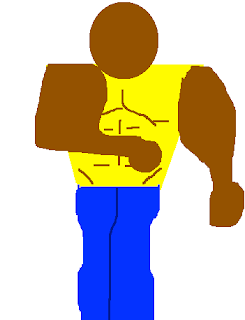 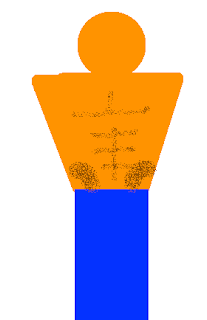 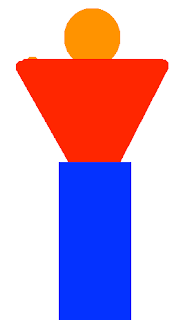 Well a lot of times that varies based on your determining factor of what makes an athlete. But if you truly think about the fact that athletes can come in every shape and size, it's truly based on the "ideal male shape." This shape shows the that this guy can build a house if need be - the TRIANGLE.

The Triangle shape forms the basis of Jacked, Fit, and Athletic. In my opinion - disagree if you'd like, but the basic triangle shape is that of this red-shirted sexy man down at the bottom. I'm going to call him Athletic because of the following reasons - Rugby players fit this shape, AFL players fit this shape, Construction workers, hay bailers, and men that spend a few hours in the gym a week can all maintain this shape. That doesn't mean that their "Fit," but that they have an "athletic build" to them.

In my opinion the difference between Fit and Jacked is muscle build. While a Fit man will have good muscle tone and you can see those little thing-a-ma-jigs by their pants' line, a Jacked man should make you reminisce about a time when Arnold Schwarzenegger spent more time competing in body building competitions and less time tanking his marriage.

And if I'm not mistaken that leaves me with just two more body types based on OKCupid's body type drop-down list.


The two pieces of man meat down here are A LITTLE EXTRA and FULL BODIED. 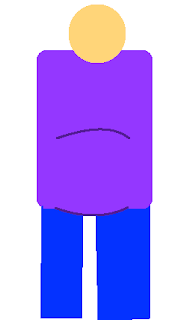 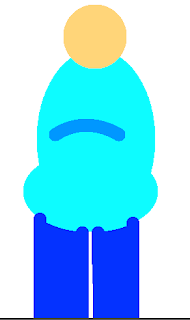 Unfortunately for Mr. Full Bodied over there I suck at drawing full bodied men. But Mr. Loving the Lavender aka, Mr. A Little Extra is the body type of all beer drinkers everywhere. You can deny it all you want, but if you're starting to see a lil' bit of something hanging over your pants in the morning, you've officially hit the list of men who know a good pizza/beer combo when they see one. (I really can't say anything about this... I have an addiction people).

And Mr. Full Bodied, well he probably let his gym membership lapse a few months/years in a row and doesn't really care. If you're trying to picture the ideal full bodied man, think Seth Rogen in Knocked Up.

So there you have it... oh... you say there's one more... this mythical USED UP body type... What is it? Idk, I think it's a unicorn or a leprechaun with a pot of gold.

Not really. I think it's probably best described as the body of a meth addict. I was going to post a picture and be all shocking and life-like in opposition to the cartoon draw somethings up there, but after digging around I got grossed out, so you'll just have to look it up yourself.

So yeah, stay tuned, because next Thursday we'll be examining female body types and how we're all curvy and thin! Because seriously isn't that the only choice on there? ;)