When it rains men, you might want to take cover...

For the longest time, whenever there's karaoke to be had, I sing one song. This song.

Unless someone else has in the last 20 minutes, and then I sing Shania Twain, but that's not the point...

The point is that I have always heard the following two phrases, "when it rains it pours" & "when one door closes another one opens."

And yeah, when life is chunking lemons at you, it gets overwhelming. And when one part of your life comes to an end, you realize that there's another chapter ahead of you, but never have I realized how true these statements are when it comes to my dating life.

A few weeks ago, I got swept up in the whirlwind romance of Goal.

Oh, god. I was head over heels madly and truly, but after he invited me mistakenly to go camping with him instead of the guy he really wanted to ask.. and then never actually apologized for not responding/never texting me afterwards - I wiped my hands of the whole affair and resounded myself to the singularity to which I am accustomed.

Don't get me wrong... I like being single - I can flirt. I can kiss, and I can date whoever I want, but I was actually really kind of bummed. So here is when I was thinking, "WHY GOD - WHYYYYY!?"

But my life does not leave ample time for heartache. So I jumped back into the pool.

The following Saturday, I put on my big-girl-britches and made my way down to Dupont and Rumors with my girl Ro. To be honest, the last time we had gone with just the two of us, we met the Marines, so I was a little skeptical of going with just us, but I bucked up, stopped whining, and we started drinking.

We had been scouting out the bar for a while, standing, chatting with each other when this tall light-skinned FBM came by. He had just walked in with an enormous group of men who looked like they should be on the cover of GorgeousBuiltMen Weekly mainly because they were part of a rather well known sports team in the area. Since, I know my girl's love of FBMs, and because she winged for me the last time, I instigated a conversation with him, and before you know it, Ro and him are chit-chatting, while I'm pushing off the advances of his exceedingly drunk friend Bob.... but where there is a will, there's a way and Bob had a very attractive "babysitter" in a very silly hat, whom I had been eyeing for awhile, and he knew it. So he swooped in to save the day.

FunkyHatGuy and I hit it off, OMG, did we hit it off.

He was snarky. He was intelligent. He was a grade-A-quality-flirter. He was exactly what I needed to get my mind off of being obsessed with Goal. We played paper-rock-scissors to see who would buy each round, and between his snark and Bob's horribly drunken advances, ie I got ass-patted, hand-kissed, and real-slobbery-kissed, FunkyHatGuy decided to claim his territory and threw his funky hat on my head. Claimed!

I'm a traditional southern girl, and it is straight class procedure to allow the girl your digging to wear your hat. So as the good southern girl I am, I dealt with looking slightly ridiculous and accepted my fate. (Very, Very Happily. You should have seen this man's arms).

When it was time for FunkyHatGuy and I to part ways due to him having to attend Mass in the morning (OMG I can bring him home to mother!!! - joke), he asked for my phone number - reasonably after Goal only used mine because he thought I was a man - I told FunkyHatGuy it wasn't happening. He insisted that he would use it, so I put it in his phone and didn't think twice about it. Aside from Goal (and remember he thought I was one of his guy friends when he texted me), I can't remember the last time a guy used my phone number after meeting me at a bar.

So enter the next week.

Fresh back on the dating scene, I agreed to a 2nd date with a guy from OkC, we'll call him Lars (think from the movie - the Thing). Lars and I were two-peas-in-the-dorkiest-pod-on-the-face-of-the-planet, so we hit it off pretty well. And I like him - he's a good guy, and we had a nice low-key movie date.

After watching the movie, we stood outside and talked for a while until he asked me to see another movie with him on Friday. The movie I wasn't too killer about - so I told him I'd let him know, not that I didn't want to spend time with him, but that I didn't really want to see the movie.

(I promise all these micro stories have a point.)

Kryptonite and I had been talking back and forth via the texts for a while, demanding each other that it was the other's turn to play in our 50 games of Words with Friends. When he mentioned how he hadn't seen me in forever because he moved far away, I asked, "so when am I going to see you?" "I'm coming into town this weekend, howabout this Friday?"

Now in my head I think o.k. I can tell Lars that we need to move our date to Sunday because I have an old college buddy coming to town, but on the other hand, Lars and I didn't have set plans.

So I decide I'll eat myself some dinner and think about it later.

Enter the next day...

It's around 8 pm, and as standard - minding my own business eating a delectable dinner and catching up on TV shows I'd missed for the past week because I have a very hectic life, when I hear my phone ding.

I grab, check message - it's FunkyHatGuy - WHAAAT?! He actually texted me?

I honestly metaphorically shit a brick, because I wasn't expecting it at ALL. I'm so used to guys asking for phone numbers to toss in their "little black books" and never use.

AND (SIDENOTE) What is the point of having a "little black book," IF YOU NEVER USE IT!!!! I am all about utilizing the LBB, and I am ALL about hooking up. Seriously... Life is frickin' short - it makes no sense to wander about and be miserable, when there's a quick, fun, and awesome way to create endorphins in the chilly fall months. Endorphins = happy people.

If more people were running around making out with the people they wanted to make out with... we'd have a whole lot less stress. And...AND! We'd have a whole lot less assholes flicking me off because they don't like the way I put on my blinker 50-yards before I dive infront of them during rush hour. Seriously?!?! Howabout you use your stupid ass middle finger for something good!

Anyway... FunkyHatGuy and I have this great series of snarky texts back and forth and before I know it, he wants to know what I'm doing Friday and if he can take me out.

I haven't really decided who I'm taking up on their offer... All I know is Kryptonite would be traveling in from out of town, so I need to make up my mind quickly, because I'm talking this Friday...

While my instinct says Kryptonite... My friends all beg to differ and have all reminded me about the boucoups of times he has fucked me over doing x-y or z, and that Long-Distance is Wrong-Distance and that while I may think he's the most beautiful man to walk the earth - he's at best a 6 in a suit. (I think he's at least a 9).

I'm actually horribly conflicted, because then I have two other great guys to think about... FunkyHatGuy or Lars, and on the one hand I know what Lars is looking for - a relationship, and grown-up-me should be jumping in, with both feet into that basket of happiness, but if I was so willing to push him aside for Goal, then clearly I'm not fully invested in him, and I don't know if it's because I don't know him well enough yet, or whether I'm not 100% into him, but shouldn't I be more concerned?

And then FunkyHatGuy is this snarky-sexy individual who put himself out there when normally no one else does, and he's smart. He's local, and seriously, he texted when he said he would text! That's madness! So I just... I just don't know...

And to be real, these guys are just the tip of their icebergs. Seriously, guys are popping out from every fucking nook and cranny... Idk if God is chunking them at me to get my mind off Goal, or if he's trying to test me to see if I'm ready for a relationship, but I'm standing here getting PELTED with men.

Seriously you should see the bruises.

My grandpa, paw-paw, grammy, and mia all use to say, "honey when you get older you're gonna have to bat them away with sticks, they'll be lining up..." and I'm not sure if that's true or if that's just something you say to your granddaughter to build up her self-confidence, but right now, I really need to invest in a sturdier umbrella or a giant stick. 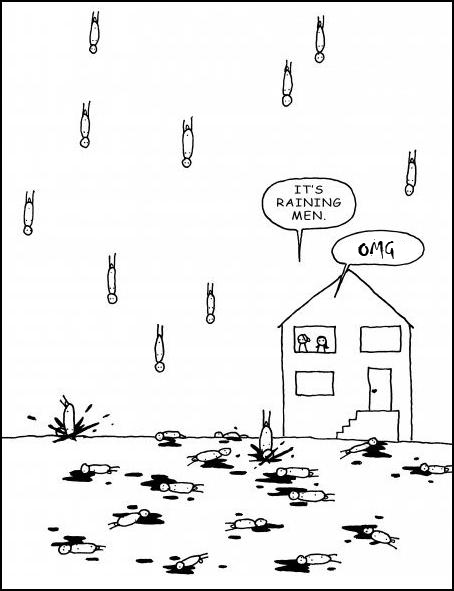