Tall, dark, and handsome. The perfect qualities of a perfect man, so everyone tells you from the moment your old enough to understand the three words. And let me tell you, he had them all. I saw him everywhere, in the dining hall, in the District, on the metro bus, on the shuttle bus, everywhere.

Every time I saw him, it was the exact same situation.

I'd be chatting with a friend and see a tall lumbering figure out of the corner of my eye. I'd look and say, "damn he's tall." I'd look again and say "damn he's attractive." (Originality is my strong point). 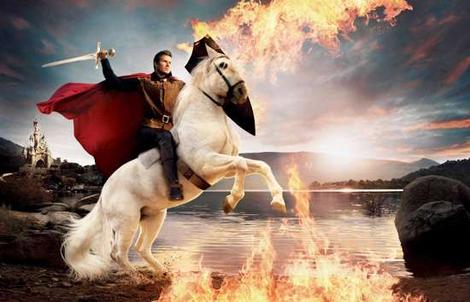 He had to be at least 7 feet tall and he had piercing brown eyes; hair that said, "I'm too cool for a comb," and one of those very very 2000ish-soul-patches, which while slightly ridiculous, doubled his devil may care appearance.

During winter he was a sight, walking around in a brown leather bomber jacket with a long and flowing autumnal scarf striped with color. It could be 88 or 12 degrees and still he'd wear the exact same outwear.

From seeing came bumping into. No not bumping into, SLAMMING into. I'd put down my Tasty Dining Room (TDR) tray and turn around, run right into his chest, stand in shock, murmur apologies, and run away as fast as possible. The same thing happened when entering buildings. I'd be freezing my southern butt off and run into Hurst (American University classroom building) and slam into someone exiting. I'd look up; it'd be him, and I'd freeze and run away, because even Snow White ran away from her Prince Charming, sure it was because his step mother wanted her dead, but in my case my mouth became hostile, turning against me, refusing to work. My vocal cords were of no help either producing mere squeaks and croaks.

After months and months of my slamming my head into his chest, we flowed into a smiling acquaintance, both never stepping over the line to introduce ourselves, until one fateful winter day. I was wasting time before a class sitting with a book in the lobby of Hurst. The change of classes started, and I looked up. Tall, dark, and dreamy was walking by and out of the building; he smiled his big, loping grin and out he went.

I looked down at my watch and saw that I needed to go to class, so, I packed up my book grabbed my bag and stood up, planting my face into his chest.

His big-leather-bound-autumn-scarfed-chest. In case you've never walked face first into a tree, let me describe it for you. It's big and unyielding to your nose.

Of course my nose starts to bleed, because that's what my nose does. He apologizes profusely with his dreamy accent (which I had never heard before) and sticks out his hand.

"Hello I am Prince Charming, and I have a story to tell you."

With one hand on my nose, I outstretched my other one and introduced myself, and because I had one hand holding my nose, I sounded less like an enticing college co-ed and more like a creepy male chipmunk.

"There was once this Nobel Laureate named Dario Fo. He was casting a play with his director and sees this headshot of a beautiful woman. He tells the director, this woman is the woman I'm going to marry."

"No no, wait. The director ends up casting her in his play and Dario refuses to talk to her. He ignores her for 6 months because he can't bring himself to talk to her because nothing he could say would be as beautiful as this woman. She however, gets horribly fed up and one day after rehearsal, she grabs him and throws him up against a wall and kisses him with such passion it is still today unrivaled."

Yeah I'm still sitting here hand on bleeding nose and mouth agape trying to breathe as my head tries to ascertain where this story is going.

He continues, "he proposes to her on the spot, and they've been married now for 50 something years."

I think I gagged. I can't be sure, but I do know after this passionate story told by this beautiful man the only thing that sputtered out of my mouth was, "I like hockey... and uh.... yeah, I can't really follow that, but I uh, I have to run to the bathroom before I run to class."

"We'll talk later. I see you everywhere." He smiled and shook my free hand.

A year later, I run into him again crossing Dupont Circle, his tall frame making even the trees seem short. We stare at each other as if we've just seen a Flying Purple People Eater and stop for a brief chat. His shaggy hair blowing in the wind he smiles, "what happened? I never saw you again, we really should. Hey, you want to get dinner with me?"

"I'm so sorry, I can't," I grimaced as I thought, 'I'm dating your much shorter twin who knows it's not ok to have a soul patch and who doesn't make it impossible to follow a story,' "I have a boyfriend."

His grin turned sad, "All the good ones get away."

After some brief conversation about what we were doing, we hugged, and he walked away, my eyes following his ex-serbian-national-basketball-playing-frame down the street, watching the future that could have been.

--Note: Prince Charming is now happily married, living in NYC as a PHD Candidate.--
Posted by LoRo at 4:09 PM